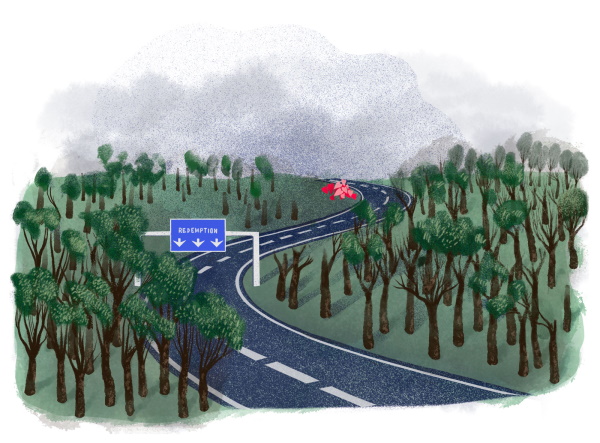 I always say I have a Jewish heart in a Catholic body with a Protestant mind.

This is how you answered me when I asked if you were Jewish, after you had surreptitiously slipped your kippa on and fastened it with a hair clip and stood before the synagogue, savoring the anticipation of entering it.

How odd that you have a Jewish heart. I don’t have a Jewish heart, although I was always curious about what it might mean to have one. My mother didn’t have a Jewish heart either, because when her parents married her Jewish father had to give up the right to raise his children as Jews. My cousins who grew up in the small town where my grandfather and uncles lived, and where I didn’t live, knew all about kosher food and Jewish holidays, while I entered a synagogue for the first time in my late 30s, and then because it was related to my job.

Obviously the marriage wasn’t the first time my grandfather’s family had to deal with the problem of Jewishness, otherwise why would they have left Prussia and Alsace for an uncertain journey half way around the world. For adventure, or because they had Jewish hearts?

I’ve thought a lot about what it might have meant to be Jewish since I came to Germany, because if you have a Jewish grandfather it’s hard not to think about it. As a white anti-racist activist, I’ve thought a lot about my moral outrage regarding racism and how pathetic that self-righteousness is, because I know I am a participant, a Mitläuferin, in the system of white supremacy.

I thought a lot about being Jewish when Jewish friends in Germany asked me if I was really sure I didn’t identify as Jewish. These questions were posed after I had read an article in a Jewish newspaper that used to be published in New York and Berlin (another heart gone); it described the phenomenon of Christian-socialized Germans who decide to undertake the rigorous process of converting to Judaism. Someone interviewed for the article explained the increasing trend of conversion, saying that it was a way for some Germans to escape being born on the wrong side of history. This inability to escape from their history, I later realized, was actually the collective failure of a nation to grasp the difference between guilt and responsibility.

I’ve thought a lot about how the possibility of being Jewish had never been open to me. Reading about the conversions and seeing the different contexts where this drive to escape guilt to become someone else disturbed me. White German leftists with dreadlocks, anarchists who travel to Kurdistan for international solidarity, Friends of Underdeveloped Countries or antifascists going to anti-Nazi demonstrations as a furious attempt to prove themselves, once and for all, that they are anti-racists. Going up against neo-Nazis is vital for the self-definition of white non-Jewish Germans who define as anti-racists.

All of this, all of this thinking, led me to realize that I could not possibly ever have a Jewish heart. Pondering the ease of gaining a trite moral edge over the rest of the racists, fills me with unease. At the same time, thinking about this heart engenders a sense of loss that is even more striking because the extent of what has been lost can never be known. But trying to work through the imagined loss doesn’t lead anywhere, it repeatedly loops back to the impossibility of an authentic reclamation. My inability to mourn that loss is then somehow jolted awake, ionized, by realizing you have your own personal kippa and that you have been saving for this very occasion. You have obviously been looking forward to giving your Jewish heart a special experience. All this thinking is suddenly accompanied by feeling that presses upon my lungs and makes my breathing shallow. I am mourning not being able to mourn. I am that far away from my Jewish heart.

Oddly, you have what I was unable to lose. Perhaps you found an extra one that no one wanted, or perhaps it was in a pile with all the other hearts that were lost in this country. While I have convinced myself that I have no right to a Jewish heart, you seem to have come by one easily. Perhaps your adoption is inspired by the admiration of the richness of Jewish culture, or even Judeo-Christian culture (one of the more astonishing racial discourses of the post-war period). Perhaps your claim is born out of tenderness, a compassion that makes you ache for all the lost Jewish hearts. Perhaps this is your way of attempting to make some good out of what happened. Perhaps, after all, it is your way of eclipsing the possibility of guilt about what happened and guilt about the possibility of anti-Semitism, because of course Judophiles cannot be anti-Semitic, just as Friends of Africa and the Karneval der Kulturen cannot be racist. All that love must mean something.

That love is such an easy love. To love difference, just because it is different: that is the love of the exotic. To love a particular kind of difference because it has been degraded and marked as inferior. A sort of self-love, a love that has redemption as its aim. But the love does not recuperate the one who is different, or redress the wrongs done to them; rather, this love is solely for the redemption of the guilty. This love is a very different kind of love than the love that some Jews have for the rights of Palestinians, a love that is often spit upon and called anti-Semitic by some. That is a love that has to work very hard, and somehow stay constant under the constant threat of being branded traitorous. I thought a lot about what it might mean to be Jewish when a Jewish activist openly expressed to the Jewish Community in Berlin that they were too grateful and accepting of the first kind of love, and that they shouldn’t be satisfied with it, and how she was then excluded from the resulting debate about anti-Semitism in Germany. People with Iris’s kind of love have to risk the threat of losing a vital kind of solidarity, a solidarity born of the need to survive. But the other kind of love, the love of difference that masks your fears, places you in no danger. On the contrary, it provides you with a warm, comfortable moral nest for your Jewish heart.

How odd that you have a Jewish heart.

How dare you have a Jewish heart.